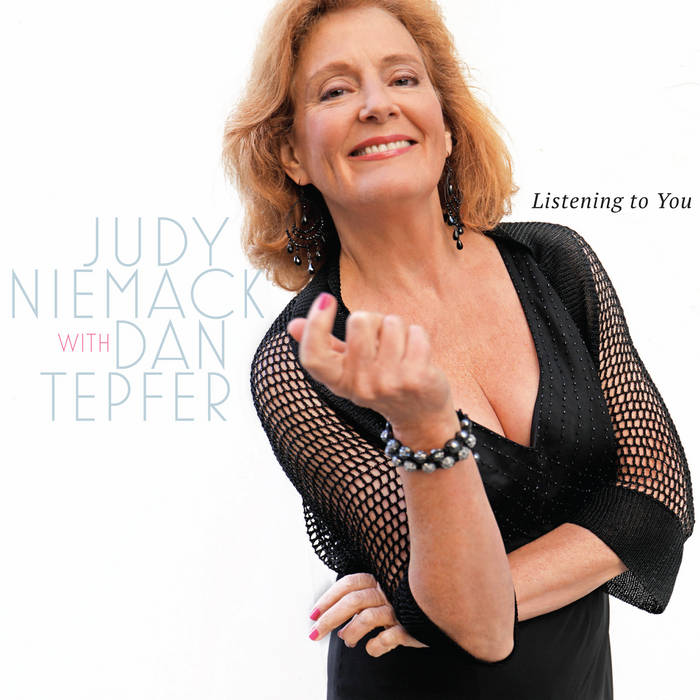 Jazz aficionados are often concerned with lineages within the music and the passing of the torch. There aren’t many musicians left who have witnessed and assisted in the development of jazz and improvised music as much as saxophonist Lee Konitz has. From the height of bebop to the current avant-garde, Konitz has established himself as a cornerstone and link between many adventurous musicians.

Two such musicians are vocalist extraordinaire Judy Niemack and the exceptional pianist Dan Tepfer. Both have been fortunate enough to play and collaborate with the legendary saxophonist. It was only natural that Niemack and Tepfer would find such a rapport when they finally met via Konitz. It took the duo no time to be at ease with each other and to pursue a lively recording, entitled Listening To You.

Niemack stands apart as one of her generation’s most celebrated vocalists. She is originally from California; her jazz studies began with saxophonist Warne Marsh, who famously studied and performed with piano polymath Lennie Tristano along with Konitz. Niemack moved to New York City in the late 1970s and began to make a name as a vocalist, writing lyrics for and collaborating with many well-known musicians, including Pat Metheny, Kenny Barron, Don Grolnick, Toots Thielemans, Mike Stern, and Konitz.

Dan Tepfer has become an important figure in his generation’s developments within the worlds of jazz, modern classical and improvised music. His path within jazz crossed with Konitz very early on, whereby he established a long-running collaboration with the saxophonist.

Niemack and Tepfer’s first encounter came when Tepfer and Konitz were in Berlin for a performance. While keeping a home in New York, Niemack had been teaching for many years at the Jazz Institut Berlin, and she always made the effort to hear Konitz when he performed nearby, allowing the singer and the pianist an opportunity to be introduced in this instance. In the Spring of 2012, Tepfer returned to Berlin where he met up with Niemack to rehearse at the Jazz Institut.

In September 2012, Niemack invited Tepfer to record at Acoustic Recording in Brooklyn, New York, for her first recording in nine years. There was a special emphasis on improvisation, interpretation and taking chances during the proceedings, as Niemack has always advocated the role of the vocalist as a musician. The duo took on a number of the standards they had rehearsed in Germany, though maintaining a playfulness throughout the session. The musicians relied on pure improvisation, though letting the lyrics retain their message. Tepfer doesn’t accompany as much as interact in time to Niemack. Listeners can hear the incredibly creative treatments from Tepfer and the joy that both brought to the recording.

The program begins with a light but insistent take on Harry Warren and Mack Gordon’s “There Will Never Be Another You.” Konitz’s “Listening To You” is based on the chord changes of “All The Things You Are” and features lyrics Niemack wrote at the saxophonist’s request, which she turned into a tribute to Konitz. Tepfer and Niemack perform a lilting version of the chestnut “Body and Soul,” which is followed by “Like a Butterfly,” a piece written by her friend, pianist Ronnie Mathews; Niemack’s original lyrics describe the carefree dancing of a young girl whose responsibilities are yet to come.

Niemack’s bittersweet “You’ve Taken Things Too Far” is about taking stock after the dissolution of a relationship and coming to unexpected realizations about love. “When Chick Came Around” is another composition by Konitz with lyrics by Niemack that heralds the work of the great pianist Chick Corea. Niemack revisits Gorney and Clare’s “You’re My Thrill,” with pathos and drama, having originally recorded it with Cedar Walton on her first recording. The extemporary version of Monk and Clarke’s “Epistrophy” is a true revelation and testament to the duo’s singularity. The program concludes with Kern’s “All The Things You Are,” a beautiful sendoff.

How better to celebrate one of the most creative and exploratory musicians jazz has been blessed with? Niemack and Tepfer are two fully developed, exemplary musicians regardless of instrument, who find a way to make music resonate and creativity blossom, as their hero Lee Konitz has done for decades. Listening To You is a wonderful example of the legacy being passed and beauty being made in its honor.